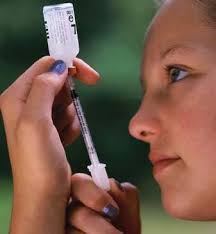 As I have acquired a few new followers, I thought I’d return to the basics by providing an overview of Type 1 Diabetes (T1D) and comparing it to the more widely known and prevalent Type 2.

Type 1 Diabetes, formerly referred to as Juvenile Diabetes, is caused by an autoimmune disorder. It is NOT caused by obesity, poor diet, lack of exercise, viruses (though see below), spider bites, etc. It is not communicable, so you can’t catch it from someone. There is no vaccination, there’s no magic pill to treat it, and there is, unfortunately, no cure. Type 1 usually strikes in childhood and young adulthood, though there are rare diagnoses in mid and later adulthood. Often times, however, these are misdiagnoses and the patient is later diagnosed with a monogenic form of diabetes such as LADA or MODY. Type 1 is the only form of diabetes that is caused by autoimmunity. It is unknown what, exactly, triggers the autoimmune response, but many researchers suspect that the body is fighting off a virus–a common cold, perhaps–and something goes awry.

With autoimmune disorders, the body attacks itself. In the case of T1D, the white blood cells attack and kill the insulin-producing beta cells in the pancreas. This process usually occurs quickly over a short period of time (usually a few weeks to a month or so). Once the pancreas is close to or completely dysfunctional, symptoms set in quickly–excessive thirst, frequent urination, fatigue, weight loss. Though these symptoms might seem mild and primarily inconvenient, they mask a more sinister and dangerous symptom of T1D–high blood glucose.

In any kind of diabetes, blood glucose levels are elevated. In a T1D, this is because the body is not producing insulin, the hormone that delivers glucose to cells so they can be converted to energy. In someone with Type 2, the body produces insulin and it works fine…the problem is that cells have become resistant to insulin and do not convert the glucose to energy as they are supposed to. The situation in T1D is much more serious.

If glucose cannot be delivered to cells, two things happen. The body starts burning fat for energy (great for weight loss but…) and the blood gets overloaded with glucose and becomes acidic. This is known as ketoacidosis. Ketoacidosis leads to kidney failure, blindness, nerve damage, seizure, and death. This is why most people are hospitalized when they are diagnosed. They are often in ketoacidosis and their bodies and lives are in danger. My son was in the PICU for three days when he was diagnosed. His blood glucose levels were over 800 mg/dL.  For comparison, a normal range is 70-150 mg/dL. Ketoacidosis does not occur with Type 2 diabetes because blood glucose levels do not usually soar as high.

There is no cure for T1D, but the disease can be treated. Unlike Type 2 diabetes, which is usually treated with lifestyle changes and a pill such as Metformin or Warfarin which help the body’s cells use glucose, Type 1 can only be treated with insulin injections–every day for life. Individuals living with T1D must check glucose levels frequently, and inject insulin every time they eat anything with carbs–fruits, vegetables, breads, pastas, desserts, etc. About the only thing that doesn’t have carbs is meat… unless it is processed.

A healthy diet and exercise are also necessary to help the diabetic body process the synthetic insulin. This is because the insulin that is injected lacks essential hormones present in an non-diabetic body that help the body process insulin. Exercise and the adrenaline produced as a byproduct of exercise sharpen the body’s reaction to insulin. Of course, a side effect of this is hypoglycemia or low blood glucose. This is why people with Type 1 must always carry candy or glucose pills because sometimes, the body uses the insulin more quickly or effectively than anticipated. Ironic, no?

If you want to know more about the physiology of Type 1 or what life is like with Type 1 in the family, read previous posts and, of course, keep reading, as I’ll try to post weekly until summer!

View all posts by profmartin